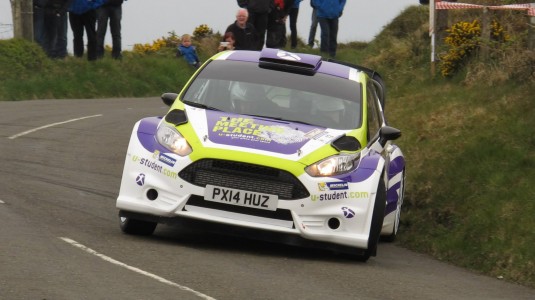 Having finished over the limit at the Isle of Man event in 2013 and 15th in 2014, Alex’s 8th-placed finish overall represents a significant stride in the right direction.

“The Manx Rally is a massive event so I was working on the pace notes for about two weeks beforehand,” said Alex. “We went to the island two days before the event for the test stages and made sure the car was ready.

“The course has a type of road you don’t find anywhere else, coupled with unpredictable weather; it was dark on the first day and sunny on the second. It truly is a unique event.”

He added: “We were mixing it with a lot of the top guys and tough locals so 8th is a great result for us.”

The 25-year-old’s usual co-driver, Andrew Roughead, was on holiday during the event, so Alex enlisted former co-navigator John Connor.

Alex said: “John did a great job considering he had never been in a car that fast before. It was a bit if a culture shock for him, to say the least.”

Already looking ahead to his next event, the ALMC Stages Rally on July 5, Alex spends a lot of time between races going to the gym to keep up his fitness and watching in-car footage of races.

However, the u-student driver will not race in the Rally of the Midlands this season, where he last year claimed his maiden win.

He explained: “I’m looking for an event to do in place of the rally, or there’ll be a long gap out the car.

“The Midlands would have been a fun rally, but any time spent in the car is beneficial. I’m keen to drive as much as possible as this sport provides a constant, never-ending learning curve.”

He added: “These breaks are difficult. It’s hard to stay focussed, and being out of the car for so long isn’t great, but we’re restricted by our budget.”

Generally a driver who gains momentum as the season progresses, Alex makes no attempt to hide his excitement for the upcoming rally fixtures.

“Once the season begins, your head shifts into rally mode; you’re constantly learning from the last race, always trying to go that little bit faster and make notes that little bit better,” he said.

“It boils down to getting as much time in the car as you can… and some of the events later in the season suit my style of driving better.”